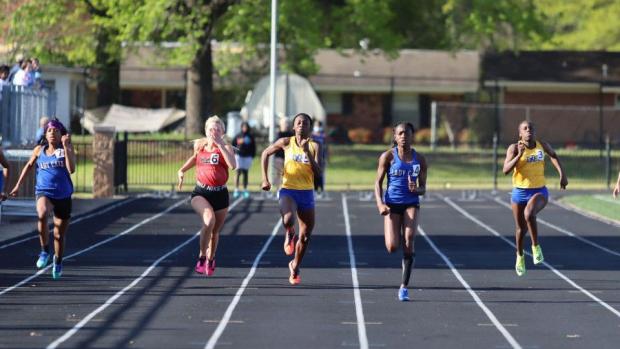 LITTLE ROCK, Ark. - It's the outdoor state track meet season once again in Arkansas as the 6A classification gets set for their meet in Little Rock on Friday, May 6.

Little Rock Central High School is set to host the 2022 6A State Track Meet and the event will be held at Scott Field.

The biggest names of boys and girls high school track & field athletes in the state of Arkansas are lined up to compete against one another at this week's 6A State Championship, which should prove to be an exciting and competitive day.

She has some tough competition in Azaria Austin (LR Central), Kessiah Bemis (Fayetteville) and Grace Lueders (Rogers) for both events.

Time between Austin and Allen's best finishes in the 100m this season is razor thin with Austin's best time being 11.99, just .01 behind last year's state champion. Bemis has logged a 12.38 time while Lueders has a 12.46 finish for the third and fourth best finishes in 6A for the 100m, respectively.

For the 200m, Austin once again follows close behind Allen with a best finish of 24.87 for second place. Lueders slots in with the third-best time this season at 25.16 with Bemis in fourth with a 25.29 time.

Lueders will be the favorite to win the 400m with a 6A best time of 57.46 this season. Two others will be right alongside her to try and grab the crown for the 400m. Bemis is one with a 59.09 finish in the 400m this season and Riley Jandorf (Bentonville West) is the other posting a 59.30 best time.

Sophia Hinkebein (Bentonville) has put up the best performance in the 800m this year with a 2:19.05 finish and looks to be the favorite to come out on top. She will have a close race with teammate Devyn O'Daniel (Bentonville) who also has a finish under 2:20 this season at 2:19.58. One other to take note of for the 800m race will be Ava Goetz (Fayetteville) who put up a 2:20.09 best finish this year.

Carson Wasemiller (Fayetteville) and Macey Hurley (Bentonville) will try and edge out Galindo in the 1600m race as they hold the next best times this season for the event.

McKenna Terrell (Bentonville West) recorded the second-best finish in the 3200m this season at 11:15.70 and will be the next favorite behind Galindo to win the event.

Six teams have produced sub 50.0 races in the 4x100 so the event should prove to be an exciting one. Conway, Bentonville, LR Central, Fayetteville, North Little Rock and Bryant make up the list of the six teams.

Paisley Hight (Bentonville) leads as the favorite for the 100 meter hurdles with a sub 15 second time at 14.88 for the best finish in 6A this season. Hight isn't without competition though as Hannah Estes (Fayetteville) also has a best finish under 15 seconds this season at 14.92 in the 100mH.

Things look a little different in the 300 meter hurdles as Kessiah Bemis (Fayetteville) looks to take the win with a 6A best finish of 44.64 in the event. Julia Gunnell (Fayetteville) also has a sub 45 second finish like her teammate at 44.99 to make the Fayetteville pair the top contenders for the event.

In the discus, look for Aubrey Skinner (Fayetteville) to take charge as she has the 6A best mark of 120-11 in the event. Kylee Branch (Bryant) and Winifred Smith (Bentonville) have a chance to take home the gold as well both logging 116-1 and 114-9 as their best performances this season, respectively.

The top four performances in 6A for the long jump this season have all jumped 18 feet or better. Emelia Thurston (Bentonville) will be the favorite to win the event. Thurston placed first in the long jump last week at the 6A West Conference Championship.

Kirstic Rowland (Conway), Kessiah Bemis (Fayetteville) and Karis Martin (Cabot) are the other three who have jumped 18 feet or better this season and will also be contenders.

In the triple jump, Rachele Turbati Zanboni (Bentonville), Laci Gartside (Har-Ber), Kessiah Bemis and Kirstic Rowland all have the potential to win the event with each jumping better than 37 feet in their best performances this season.

Madison Holloway (Conway) put up the best mark in the high jump this season with a 5-6 jump at the 6A Central Conference Championships last week. She finished third in the event in last year's state championship meet and will be the top contender heading into this year's meet. Look for Rachel Wilson (Bentonville West), Hight (Bentonville) and Goetz (Fayetteville) to give her a challenge for the high jump crown.

The favorite in the pole vault will be Estes (Fayetteville) who has recorded a 6A best mark of 12-8 this year.

Don't count out Kylie Coleman (Bentonville West), Isabel Garton (Fayetteville) and Sydney Overton (Rogers) though as each has put up a mark of 10-0 or better this year.