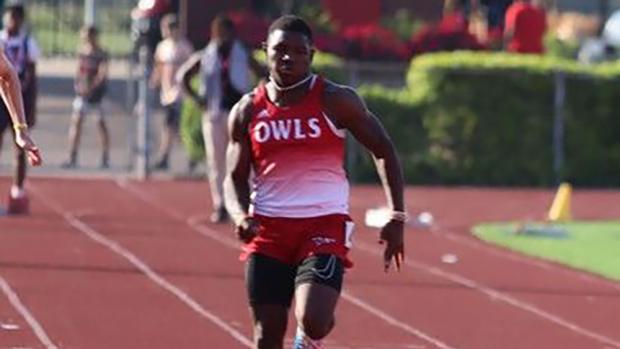 Now that the Arkansas outdoor season has concluded, here are some of the girls that stood out from the 2022 track and field season.

They say you can't teach speed. Nor can you teach hops, but it helps to have that, too. Evidently, Beebe High School senior Adrian Carranco possesses both speed and leaping ability in spades.

At the 5A State Championship Meet in Van Buren on May 4, Carranco launched himself a distance of 48 feet, 1.25 inches in the triple jump. Just how good was this mark? It was easily the furthest jump in the state this year; at the time, it stood as the #8 mark in the nation among high schoolers in the 2022 outdoor season, and it came within a few inches of the all-time state record set by Little Rock Parkview's Donavan Loring at 48-9.00 in 2006.

This was merely the beginning for Carranco.

Carranco will take his track talents to the next level when he begins competing for UCA in the Fall.

The Mountain Home Bombers' 4x800m relay team knew their capabilities. They simply needed to put it all together.

And they did just that.

At the 5A State Championship Meet in Van Buren on May 4, the Bombers won the relay with a time of 8:00.80. Their effort fueled the Mountain View boys to a team title at the meet, their 44.5 points eclipsing the aforementioned Beebe Badgers in second with 43 points.

A week later, at the Meet of Champions, the team of Anderson Hodges, Andrew Westphal, Bryson Hodges, and Ky Beckford left it all on the track, racing the stick around eight laps in a state record-shattering time of 7:46.36. This 14-second erasure ousted the previous record (7:52.21, set by Vilonia in 2021) by 6 seconds. It was also necessary: Springdale finished second in 7:49.14 and Fayetteville Har-Ber third in 7:52.10, each faster than the previous record. The event victory paced the Bombers to a team title at the meet.

Mountain Home's 7:46.36 marks the seventh-fastest time in the nation among high school teams this season.

Easter Rises to the Occasion

People often talk themselves up about being the smartest, toughest, or fastest. But where the rubber meets the road, it's all about who backs it up. Without saying a word, McGehee's Jody Easter proved himself to be the fastest high schooler in Arkansas.

At the Meet of Champions, Easter outleaned Beebe's Tyjuan Huffman by thousandths of a second. Both finished in a time of 10.74, but Easter was given the slight nod, crowning him the overall 100m state champion for the 2022 outdoor season.

Easter's 10.74 at the meet was the fastest 100m time in the state this season and a top-10 fastest time in state history.