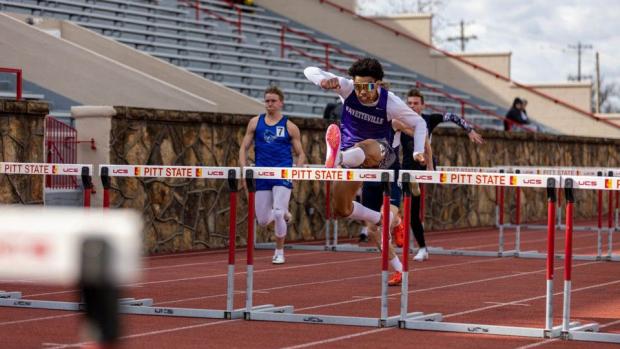 LITTLE ROCK, Ark. - It's the outdoor state track meet season once again in Arkansas as the 6A classification gets set for their meet in Little Rock on Friday, May 6.

Little Rock Central High School is set to host the 2022 6A State Track Meet and the event will be held at Scott Field.

The biggest names of boys and girls high school track & field athletes in the state of Arkansas are lined up to compete against one another at this week's 6A State Championship, which should prove to be an exciting and competitive day.

The top five performances in 6A for the 100m this season all finished sub 11 seconds, which should prove to be a fun race at this year's state meet.

Headlining the top finishers this season for the event is Damari Smith (Ft. Smith Northside) with the best overall performance in the 100m at 10.60. He will be competing against other top finishers Carson Tucker (Bentonville), Isaiah Sategna (Fayetteville), Mason Bell (Cabot) and Nick Bell (Bentonville West) for the 100m crown.

Smith will also be the favorite to win the 200m posting the best performances there this season with a 21.36 finish. Sategna, Tucker, Johnny Lewis (North Little Rock) and Bell will do their best to try and take first place for themselves and beat out Smith.

Other competitors in the 400m to keep an eye on will be Ethan McCarthy (Bentonville) and Nicholas Quinn (Rogers) as both have a best performance within 50 seconds.

This year's boy's distance should prove to be another intense lineup of strong candidates to take home the gold.

The same group of five will hold as the favorites in the 1600m as well, but with Betts as the heavy favorite since he owns this season's fastest time for the event at 4:09.96. Welch, Boyer, Kemp and Stobaugh will make things interesting though.

Betts will also play the top contender in the 3200m race with a season-best 9:16.39 time. Following behind Betts will be James Eslick (Har-Ber), Boyer, Kemp and Aidan McDaniel (Bentonville) who all slot within the top five performances in the event this year.

In the 4x800m, Fayetteville will enter as the top contender with the best performance in 6A this year at a 7:58.26 mark. Bentonville will give the Bulldogs a tough fight though with a strong best finish of their own at 7:59.28 last week at the 6A West Conference Championships. Rogers Heritage and Cabot could also provide impressive results.

Rogers comes in as the favorite to win the 4x400m relay with a top 3:24.81 performance in the event. Bentonville also has a sub 3:25 time and could easily be just as favored.

The contenders in the 4x200m relay will be Bentonville with the only sub 1:30 performance of the year. The Tigers will be followed by Bentonville West and Fayetteville to close out the top contenders.

For the 110 meter hurdles, Isaiah Sategna (Fayetteville) and Joshuah Shepherd (Rogers) open as the heavy favorites for the boys as both have put up a top performance finishing under 15 seconds. Sategna was the state champion for the event in 2019.

Sategna will also be the top contender in the 300 meter hurdles as he owns the only time in 6A under 40 seconds at 37.37 for his season-best. Like the 110mH, he was also the state champion in 2019 for the 300mH. Thomas Hodges (Bentonville) and Sloan Jones (Fayetteville) should also prove to be strong participants in the event.

Devyn Steingisser (Bryant) heads into the meet as the favorite in the discus owning a 6A best 157-5 mark. Loagin Jacobs (Bentonville West) and Kaman Johnson (Bentonville) will also provide a strong presence on the list of top contenders.

In the shot put, Steingisser is also the top contender owning the 6A best 54-3 mark in the event this season. There will be fierce competition from Isaac Chapman (Rogers) and Brooks Young (Fayetteville) though that will prove to be quite the challenge for Steingisser.

Finding himself back at the top as a favorite is the 2019 long jump state champion Isaiah Sategna (Fayetteville) who has the best jump in 6A this season at 23-7 feet. Expect high-level competition from Cam Massey (Ft. Smith Northside) and Drake Fowler (Bryant) in the long jump as well.

A solid group of three in JJ Lockett (Rogers Heritage), Tyrique Scott (Fayetteville) and Micah Hill (Rogers Heritage) find themselves as the leading favorites for the triple jump with each logging a jump of 44 feet or better.

In the high jump, expect Cooper Williams (Fayetteville) to lead the favorites in the event. Williams owns the best jump in the 6A this season hitting a 6-10 mark. Other notable participants in the high jump will include Riley Buccino (Bentonville West) and Jayden Welch (Bryant).

Cade DeWitt (Bentonville West) will open as the top contender in the boy's pole vault owning the best performance at 16-4.75 this season.

Challenging DeWitt for the state title will be Quinn Hawkins (Cabot), Will Furlow (Fayetteville) and Jacob Beal (Conway) who have all hit a mark of 13-8 or better this season.